In The Mens starring Sydney actor, Ben Maclaine and Melbourne actor Ben Grant is a collection of comedic and dramatic monologues examining generations of the Australian male psyche. The original production at the Tap Gallery in Sydney in late 2008 was one of the most enjoyable and artistically fulfilling journeys I’ve ever been on. Half of the pieces have been retained from that production, and four more recent pieces have been added. Ben Maclaine journeys to Melbourne to return to various roles. From jockeys addicted to cheesecake to exhausted stockbrokers falling asleep on the Geelong Rd, In The Mens looks at men from all walks of life.

Ben Grant and I will be on Richard Watts’ SmartArts on 3RRR on Thursday April 13 @ 10am talking about the production. I will then be on 3AW with Denis Walter the same day at 2PM continuing the conversation. 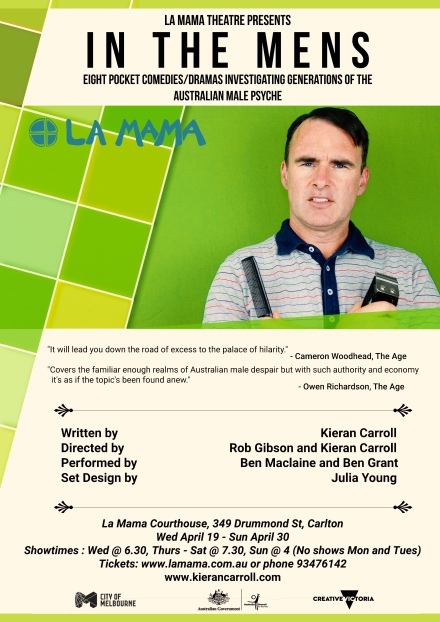